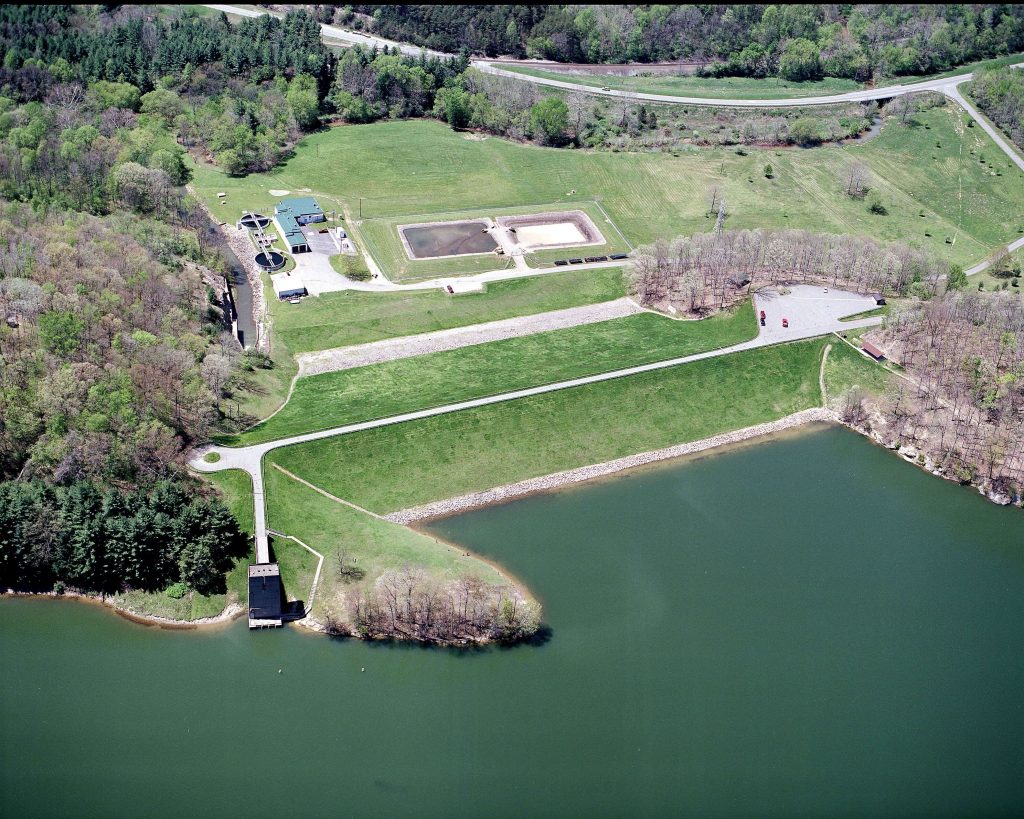 Tom Jenkins Dam (Burr Oak Lake) is a multi-purpose flood control project built by the Corps of Engineers under the authority of the Flood Control Act of 1944.

The U.S. Army Corps of Engineers owns 100 acres of land surrounding Tom Jenkins Dam including a portion of Burr Oak Lake in front of the Dam. The Corps also purchased the rights to flood around the land around Burr Oak Lake up to an elevation of 750 feet. .

Golden Age and Golden Access passports may be used for a 50% discount at Wayne National campgrounds, but not at Burr Oak State Campgrounds.

Public restrooms are available in the recreation area. The restrooms are closed during winter months, but a universally accessible porta-john is available.

The early settlement on Sunday Creek, just below the forks of the stream became the village of Glouster. Most of the first projects in the Hocking River-Sunday Creek Basin were for security, survival, protection, and then water development such as wells, gristmills, wharfs, boat building and salt mining.

The new settlers of the Hocking Basin did not create or cause the annual spring floods. The damaging floods were there long before settlement, but little record was made of these events. The need for flood control and water management along all the Ohio-Hocking system was soon realized as communities grew and the development of floodplains increased. The terrible Hocking Basin floods of the previous century are recorded in old Athens newspaper stories and were all very destructive at Lancaster, Athens, and Glouster and to agriculture and farm lands all along the valley. The 1907 flood was the highest of record and nearly devastated the Hocking River Basin. After the 1913 flood, which resulted in nearly $200 million in flood losses and the loss of 415 lives in the Ohio River Basin, the state legislature on 18 February 1914 passed the Conservancy Act of Ohio. This Act authorized the creation of conservancy districts, which would have the power to plan, construct and administer flood control and conservation projects, issue bonds, purchase land, levy assessments and enter into cooperative contracts with the state and Federal Government for any necessary work. This was the beginning of modern flood control and planning.

While the spring floods were damaging, the record summer droughts of 1930, 1931, and 1936 were so severe that Glouster, Ohio, was spending about $10,000 dollars each summer to haul drinking water. This, and the very damaging floods of January 1937 and May 1938 led to the formation of the Sunday Creek Watershed Association and the Burr Oak Dam Association, and resulted in further flood control studies. A survey report on Hocking River, Ohio, and in the vicinity of Athens, Ohio, dated 26 June 1941 recommended the best and only possible plan for the basin was a combined effort by the Federal, State, and Local interests in a multi-purpose water conservation project for Sunday Creek, at an estimated cost of $400,000 dollars. This was the start of the Tom Jenkins Project as we know it today and many years later the Watershed Association evolved into the formation of the Hocking River Conservancy District. The outbreak and intervention of Pearl Harbor and World War II postponed any further action for the duration of the war. The Flood Control Act of 1944 was approved 22 December 1944, authorizing construction of the multipurpose Burr Oak Dam and Reservoir project at an estimated cost of $695,000 dollars. Due to World War II, construction of the project was again deferred until peace time. A $2 million cost sharing agreement for the Burr Oak Project was reached by the State of Ohio and the Federal Government on 22 January 1948. Work began 3 days later on 18 March 1948, closure was effected in November 1948 and construction of the dam was completed 3 February 1950. By Congressional act, the dam and related structures were named the “Tom Jenkins Dam, Ohio,” in honor of the late congressman who represented the Ohio 10th district and conducted the legislation through congress. In many reports the original name of Burr Oak is still used for this lake and the state park is so named. The dam is located about 0.3 miles above the mouth of East Branch of Sunday Creek, a tributary of the Hocking River, 4.5 miles northeast of Glouster, in Trimble Township of Athens county, Ohio, 0.4 southeast of Burr Oak, Ohio